Back to Basics. Making crepes. 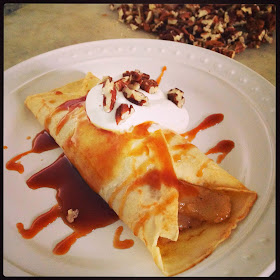 I tend to be wary of crepes. I love them, but I just happen to have a habit of burning them as if I were knitting tissue paper over an open flame. Dodgy business these crepes.

Admittedly, at times I have a tendency to simply skirt away from certain challenges as if stealing away from disapproving parents in the middle of the night, not bothering to even leave a note. Most of my life I'm happy to meet a challenge. Yet there are always those lesser confrontations; ones where neither your future nor your reputation on the line. Some of them don't even bother to address you, instead happy to lay a deck chair out in the middle of the road and wait for you to drive around them simply because, let's face it, it's easier for both of you that way. 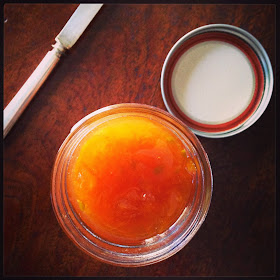 -The perfect cure for the busy mind.-

We took down the Christmas tree today, an event that has as much joy as getting your bits waxed. Down came the teddy bear advent calendar I grew up with. The mistletoe - which didn't see nearly enough action - was removed from the foyer. The mantelpiece was de-garlaned. The tree's bobbles and strings were delicately removed and tucked into boxes with a throw-n-go method. The tree itself, a marvelous Martha Stewart fake that could fool even the most scrutinous botanist if not for the lights miraculously growing from its branches, was packed away.

Once stored and shelved for the next eleven months the husband and I went out to the garage for the comfy sack - a large beanbag chair of sorts. It's filled with foam pellets instead of those crappy polyurethane beads that exploded over many a living room in the 80s, and upholstered in a chocolate microsuede cover. Quite fun. Extremely comfortable. I highly recommend it if you want a touch of whimsy in your home.

It was also, apparently, very peed on. 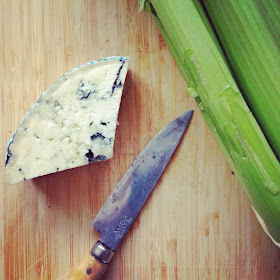 -The first meal of 2014. Some French blue cheese called Fourme d'Ambert and a bit of fresh celery from the Asian farmers' market in downtown Sacramento.-

I like to wrap up the years on this blog by going through resolutions for the coming year and reflecting on ones that we're about to nail up in the coffin. I usually make a list of resolutions and try to hold myself publicly accountable because, well, someone god damn has to.

However, this year was a rather busy year. There was the hunt, purchase, and complete remodel of the house down to the studs and then building it back up. That consisted of a lot of work with a contractor, hosing down asbestos, hammering in floors, painting every surface, and moving (which, I'm pretty sure is God's way of proving that he's not always going to help so much as sit back and laugh). Not to mention the process had a few extra surprises like having to mug my bank account to buy a new furnace and having homeless people break in and jerk off on the wall.

Then there was the book. Two and half years of pregnancy defined by a constant craving for carbs and dairy followed by a well-publisized birth defined by excellent reviews and a minor bit of critique. After that, Melt's mother and I paraded him up and down the West Coast like the proud parents we are. Admittedly, he's all grown up and while we love him I feel Melt is like a high school grad: it's time for him to move the fuck out of my house and get a job or go to college.

Not that we won't support him. We still have more events coming in 2014. Woo!

So what's this year?

Well, I'd like to keep it simple to be honest.